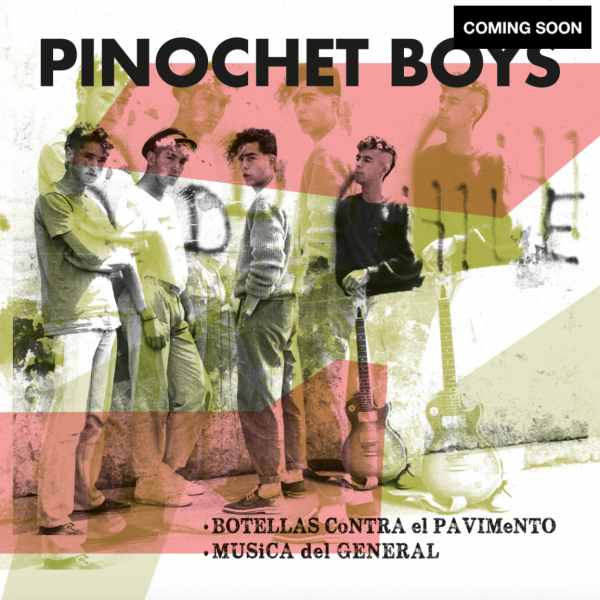 Hueso Records is excited to announce the second pressing of Pinochet Boys. The music of iconic Chilean punk band Los Pinochet Boys from the early ’80s, that until 2012 had never been published. Hueso proudly debuted their recorded music in 2012 with limited edition 7” Vinyls. Second pressings of these original vinyls will be available starting May 15th, 2020.

The record contains the only two studio-quality tracks they ever produced, both from 1984, taken directly from the original tapes, which remained shelved with the band members for 28 years until now, being released to the public for the first time in a 7” mastered by Rodrigo Gomberoff, pressed for Hueso Records in the Czech Republic and with the sleeve printed in the U.S. Jorge González –leader of the legendary Chilean band Los Prisioneros, protagonist and close witness of the 80’s scene events (HR-27)– has written: “The sound of Los Pinochet Boys was a cross between the output of two non-musicians and two virtuosos with a deep knowledge of tradition, so they sounded like nothing else that was around. They came out of nowhere and weren’t aiming for any kind of success, yet the only two songs they made in studio are still brilliant today –especially if contrasted against the pale efforts of their contemporaries. Side A, Botellas Contra el Pavimento, sung by Dani, should have been played over and over on the radio, become a classic and been available to be shared; the B side, Música del General –although more traditional– shines as well as one the greatest examples of Santiago’s hardcore, with all their voices galloping together through the streets”. Published by HR in an edition of 500 copies.

At the most repressive point of the Pinochet dictatorship, Daniel Puente Encina formed an explicitly anti-fascist punk band with his friends and called it Pinochet Boys. Their first single? “Music of the General.” This was not the kind of punk danger most Americans are familiar with; it was not even a Green Room-type scenario. This was treason against a fascist state. With every show a secret, risking shut-down by military police, Pinochet Boys gigs were places for young, emerging activists to meet and strategize. The youth movement would become a crucial part of the revolution that led to the Chilean national plebiscite in 1988, a referendum that finally forced the Pinochet regime from power and paved the road for democracy. “This machine kills fascists,” indeed—though Encina and the other Boys were exiled in 1987. From a purely musical standpoint, the song was half classic sing-along punk-band-name-as-anthem and half bizarre, zippy new wave outer-space transmission, one of the weirdest and coolest earworms around. Even if it hadn’t played a historically documented and practical part in actually bringing down a 16-year dictatorship, it’d be worthy of inclusion here.