Singer/songwriter Alvaro was born in Chile seventy years ago and is still composing and touring. Special mention must be given to Hueso Records and Alvaro, who despite what seemed a curse or jinx carried by this extraordinary work, are finally giving it new life. About the record: It must be said that the circumstances surrounding the record that you hold in you hands are far from normal. The recording was made in 1986 in Exing, Germany, but the master tapes were destroyed in a fire in the studio where the material was recorded, along with thousands of other tapes. The original cassette format—as it was released—survived only partially. Producer Anton Bubenick died shortly after due to an excess of alcohol and cigarettes, and there was legal wrangling involving Alvaro and the owner of the studio. In other words, Reaching for the Masses hardly reached anybody. But one thing is certain—the quality of the music has stood the test of time and sounds as fresh as when it was originally recorded—using only regional musicians from a mainly agricultural area. The recording took about 15 days to be completed. 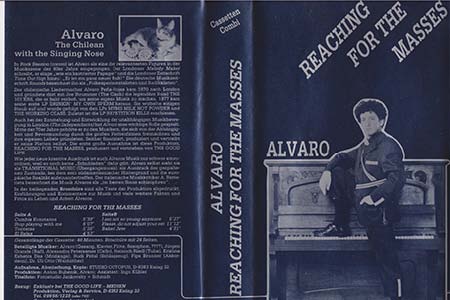