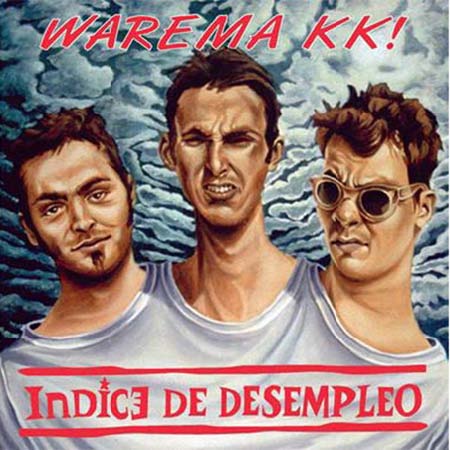 Icons of the pioneers of the Chilean punk scene and the darker side of a pseudo new-wave born out of the last gasps of Pinochet’s regime, Índice de Desempleo was started in Santiago de Chile in 1986 by four still-in-school-mates: Tatán Millas on bass/voice, Cristóbal Pfennings on keyboards, Pablo Hermansen on guitar and Huevo Díaz on drums. Warema KK recovers the very first (and only) recordings of the band, made in 1988, by then featuring Judith Harders on drums and Andrés Poirot on guitar, as the band had already undergone one of many line-up changes to come. As intimate as they are wild, both sides of this record offer a glimpse of the eclectic style the band subsequently explored during nearly five years of live performances ahead, going through several formations and musical approaches, as they synthesized influences from earlier punk and hardcore, garage, urban-funk and whatever they felt was useful to appropriate and re-use within the anarchic, D.I.Y. spirit of true punk. With lyrics “inspired by French symbolist poetry”, throughout the years, Índice de Desempleo was always committed to exposing the social discomfort of that era in Santiago, a city they often described as “greyish, boring and flat”. Original cover art by Marcela Trujillo, published by HR in a limited edition of 100 copies.